On Friday June 21, 2013, at approximately 2:00pm, Coalition team members shut down their laptops and embarked on a test of survival. Weapons were raised, wounds acquired, and coworker relationships were put to the test.

Okay, okay, the weapons may have been paint guns, the wounds, gnarly bruises we 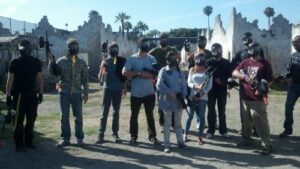 showed off on Monday (battle scars!), and after spending a day getting to know each others’ battle tactics, our team feels stronger than ever.

The afternoon was spent ducking and charging across the rugged terrain of Hollywood Sports Complex in Bellflower. With our gear on and paintballs loaded, we morphed from a group of techies into an army of ruthless soldiers.

We learned new truths about many of our teammates. We watched our sweet and friendly 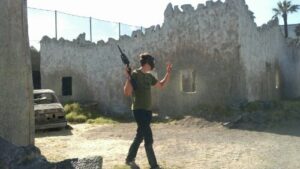 graphic designer become a rampaging war hero. We saw grown men shake in their shoes. Turns out SEO skill doesn’t necessarily equate with paintball dexterity, because we watched our fearless leader, Joel, do something he’d never do in business – surrender.  To be fair, he may have been at a disadvantage; perhaps we were gunning for the boss.

At Coalition, we spend day after day in battle: outwitting Google, championing the web. Paintball was the perfect way to sharpen our strategic thinking, build our team dynamic, and equip us better for daily combat. Or maybe it was just fun…

How We Improved Live Copy Rates