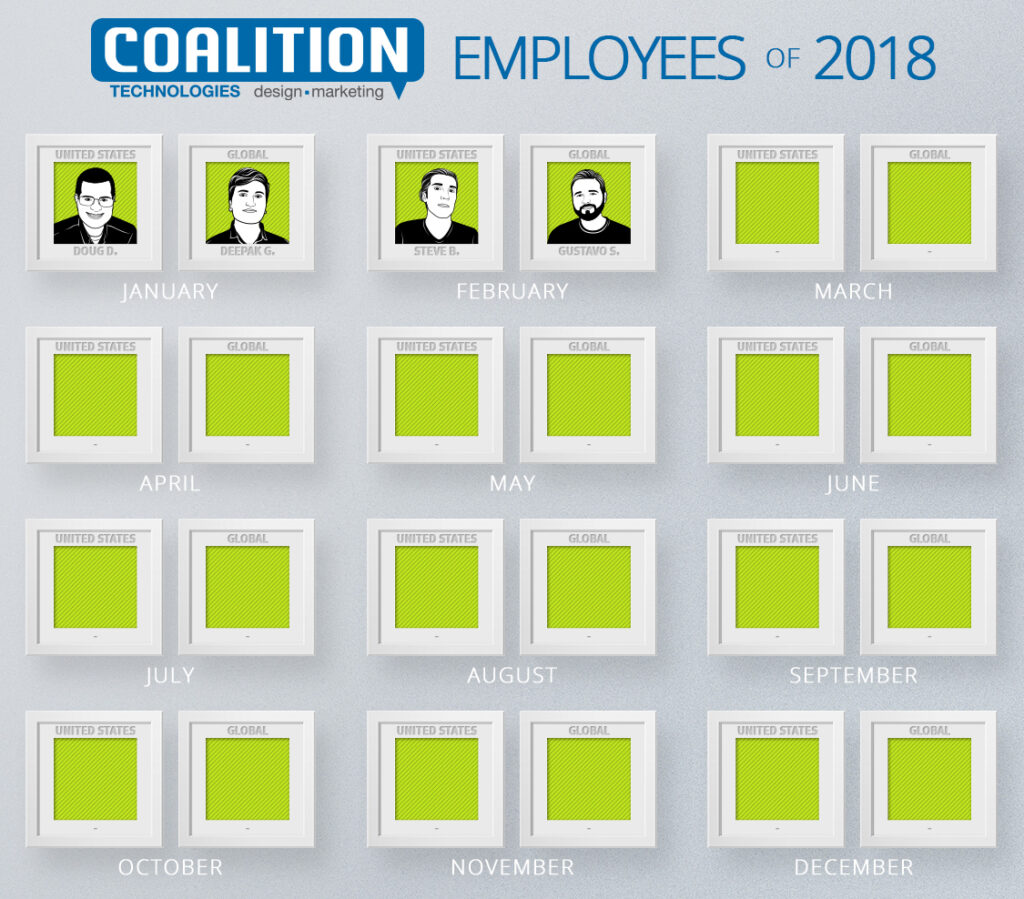 At Coalition Technologies, we are so lucky to have the opportunity to work with so many smart and talented individuals. Our standards for new hires are extremely high, and our work shows it. We aren’t ranked the number one SEO agency in Los Angeles for nothing! Steve and Gustavo are two perfect examples of the stellar work that comes out of Coalition. Their dedicated efforts to make ours the greatest digital marketing agency are why we’ve chosen them as February’s employees of the month.

Behind the Scenes with Steve

Steve started with us in May of 2017 as a Digital Producer. In his role, he works heavily in client strategy and project management, making sure that all his clients’ campaigns are running smoothly and performing well, and that the client is informed about everything that is going on in their campaign. He works with clients from verticals such as jewelry, fashion, sports equipment, and family law.

He loves that, with Coalition, he is able to work with such a diverse group of team members. We have over 100 team members all over the world – there’s nothing better than collaboration across the globe! When Steve isn’t checking up on all of his clients, he plays the guitar and hangs out with his dogs. They’re all named after Star Wars characters: Kenobi, Leia, Chewbacca, and Bane!

Behind the Scenes with Gustavo

Gustavo is a designer with Coalition, and started here in August 2017. Our talented designers create website mockups, PPC banners, infographics, and employee illustrations, and Gustavo is no exception! He works with just about every industry in his position, from fashion to automotive modifications to QME, IME, and AME services, making what he calls “nice looking stuff.” We think he’s being humble! His designs always look amazing.

His favorite thing about working for Coalition is that he feels trusted to do what he was hired to do – he always feels like his opinion is taken seriously and has the right amount of freedom to be creative. When he’s not laying out his latest infographic, he is listening and playing music. He’s been playing the drums since he was 14 and is now learning to be a proper guitar player. We think he and Steve should start a band!

Keep an Eye Out for March!

Our team is full of awesome team members whose hard work keeps us moving forward! We are continuously amazed by the hard work our coworkers do, and the support we provide each other. Employees like Steve and Gustavo are why we have so many happy clients! Be sure to keep your eyes peeled for March’s employees of the month, so you can learn more about the inner workings here at Coalition Technologies.

Coalition Technologies Has Been Named a 2022 Google Premier Partner

‘Tis the Season to be Selling: Must-knows for the 2021 Festive Period